Tea and a Chat with Awards’ Host Charlie Lawson

Just hours away from the Northern Ireland Travel Awards 2019, NI Travel News’ GEMMA WEIR managed to steal a few minutes with the host of the evening, Mr Charlie Lawson...

The biggest night of the year was about to kick off at the Slieve Donard Hotel in Newcastle. Just hours away from the Northern Ireland Travel Awards 2019, NI Travel News’ GEMMA WEIR managed to steal a few minutes with the host of the evening, Mr Charlie Lawson…

Best known for his role in Coronation Street as the legendary ‘Jim McDonald’, this Northern Irish born icon was happy to grab a wee cup of tea and a chat with us before it all got started. From the offset, it is clear to see that Charlie is proud of his roots: “First time here [at the Awards]… I’m delighted to be here.  Anything I can do to help home is always an honour.

“Everybody has worked so hard, and you travel the world but Northern Ireland is the place people want to be.”

Charlie was born in Enniskillen, County Fermanagh and spent his school years at Campbell College in Belfast. Charlie is like a lot of us here though, as much as we all might love our wee country, we’re all missing a little bit of sunshine on our home turf.

“I love hot weather.” Charlie explains when I asked him where he likes to holiday outside of Northern Ireland, “The Maldives, South of France… It’s so expensive if you like to turn left… and I like to turn left.

“We’re going to the Mauritius… But I know how it is, and I know what it’s like having a holiday at home. Debbie and I are over here every three weeks.”

So when Charlie is ‘back home’, where does he like to go for a ‘staycation’? “Co Fermanagh…” Charlie has no hesitation in his answer, it seemed like the obvious choice. When you’re back home, go ‘home’?

“The great thing about the lake is, well, if you want to now you can go away down to Shannon, you can go to the Atlantic if you had three weeks! The lower lough is beautiful and its completely and utterly empty, it is extraordinary, its one of those anomalies, but you don’t want to tell everyone about it because you don’t want to spoil it.

“We steamed from the Manor House to Crumb and apart from steaming through Enniskillen, we never saw a boat, and that was in June.

“Everybody had a slice of the cake, certainly this year, the whole of the lower lough was empty and it’s brilliant.”

“Debbie and I could have fun in a coal mine. We’re a very lucky couple. “I have a pair of divers sandals, she [Debbie] doesn’t like them actually, they’re as tough as old boots, they’re not very pretty but you could walk for miles in them and jump in the sea in them, so I always have them.” (Sounds remarkably like Crocs to me but Charlie assured me they are not! “And, I actually won’t travel without a very good moisturiser!”

Makes sense… Long flights, dry heat, sandy beaches – When your face pays the bills, it’s only right you look after it. Charlie held his ‘Norn Iron’ wit and charm and that unique sense of humour that isn’t found anywhere else in the world, so I wasn’t a bit surprised at the response he gave to my next question: “Have you any particular funny memories/mishaps from your travels over the years Charlie?”

“Yes, I have loads, most of them you couldn’t print. You can say I have had plenty but they’re in the bygone days of yor and they’re not for public consumption… They’ll all come out in the book.”

So, I’m getting to know Charlie Lawson by the minute, he’s had a fantastic life, his successes are well known, he has worked hard enough to turn left to the posh seats on the aircraft and he still loves to come back to where it all started, back to Northern Ireland; but what tops Mr Lawson’s bucket list?

“You know, one thing I’d love to do, I’m a very good rider, I’m a better rider than I am actor, that’s what I do best. Theres a couple of companies in Botswana that specialise in horse back riding holidays, they’re very specialist, but you have to know what you’re doing. You ride among the wildlife basically and the horses are top drawer… I’d love to do that.”

Given what a fantastic year for cruising 2019 has been, I couldn’t not ask my next question; and cruising can be a bit of a crowd divide, a bit of a Marmite moment, which camp was Charlie in when it comes to sailing the seven seas in pure luxurious floating elegance? (No bias from the interviewer of course!) “If I could find a cruise where no one watched telly and didn’t know who I was, that would probably be quite good. I have to chose my holidays carefully, otherwise it just becomes intrusive.”

That sort of shut down my next question, ‘where would you go on your ideal cruise?’… But that was fine, the time was ticking on, Charlie had a Tuxedo to put on and I had a head full of clips.

When you get chatting to such an interesting, down-to-earth character like Charlie, it’s easy to lose track of the schedule. But this was the biggest night of the year – The Northern Ireland Travel Awards 2019 – Lights. Camera. Action! 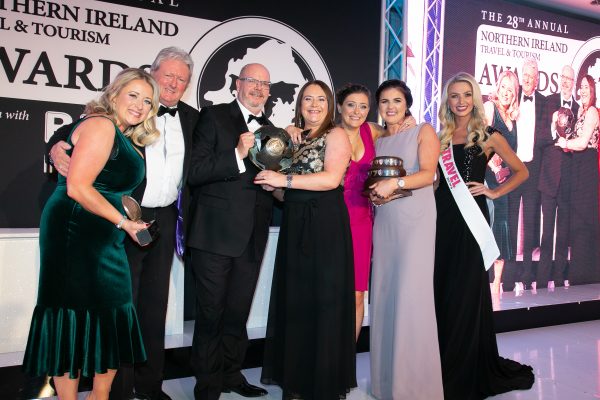 Norway’s New National Museum to Open in Oslo in June

Lateral Flow Tests are Now Acceptable for Entry into Portugal