Paul Clements has been experiencing the relaunch of the spectacular Independence of the Seas during a two-day cruise through the shipping lanes of the English Channel...

During the trip we learned that Northern Ireland has been the fastest growing region of the UK for cruise ship travel in the past two years.

The details were revealed during the relaunch of the Independence of the Seas when Clubworld Travel won the award for the Best Overall Performance by a Northern Ireland travel agency.

The ship, which is one of the Royal Caribbean’s international fleet of 25, had been given a multi-million pound makeover with many new features.

It was also voted the UK’s favourite cruise ship and promotes a superb ‘thrill and chill’ experience.

For the first time guests can try the Sky Pad, a new virtual reality bungee trampoline or spend time at the interactive Aqua Park, Splashaway Bay.

There are also new racing water slides called Cyclone and Typhoon. A glow in the dark laser tag and Puzzle Break, which is a new escape room where guests work together to find hidden clues.

The ship’s general upgrade includes refurbishment and refreshment of many areas, including restaurants and bars. With a staggering total of 163 cooks and 200 waiters guests will never be hungry or thirsty.

It will call at destinations throughout Europe and the Mediterranean until November 2018. 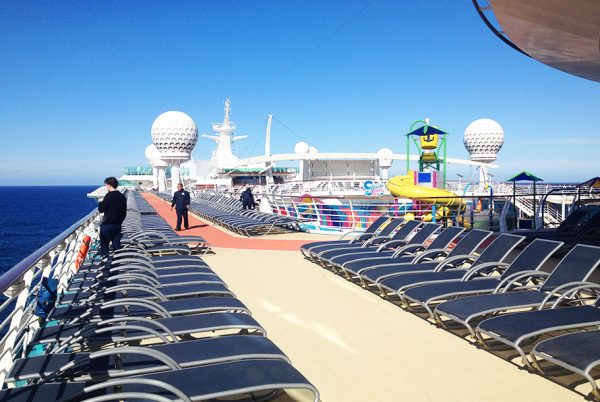 “IT’S GREAT TO BE BACK” SAYS SILVERSEA’S PETER SHANKS