Raise a glass to saving a piece of Belfast's history! NI Travel News got an exclusive first look at the renovations planned for the new Titanic Distillers whiskey distillery and visitor centre...

A year after being given the green light to save one of Belfast’s most iconic buildings, Titanic Distillers have announced that it is investing £7.6 million to create a new whiskey distillery and visitor centre in Belfast’s Titanic Quarter. The NI Travel News team were invited down for an exclusive behind-the-scenes sneak preview of what the Distillers have planned for this important piece of the city’s history.

The ever-expanding Belfast docks are a place of great pride for the people of Northern Ireland. Iconic in every way, not just for being the birthplace of the Titanic (which was in perfect condition when it left us), but also for the long industrial legacy of the Harland and Wolff shipyard and the prosperity it brought to the local people. Almost every person in Belfast can trace their history back to that dockyard – with many having ancestors who worked on the famed Titanic herself – it’s a place that is woven into the fabric of Belfast’s long and industrious history. The early 20th century was a golden age for shipbuilding and for Belfast. In the half-century from the 1850s onwards, Belfast grew more rapidly than any other city in the British Isles. This was partly because of the growth in textiles, engineering and shipbuilding which, by the turn of the century, employed around 164,000 people. With a workforce boasting almost 15,000 people, the Harland and Wolff shipyard in Belfast not only created Titanic; it shaped the fortunes of the city and its people. Beneath a canopy of cranes, amid thickets of cables and chains and ropes men toiled the shadow of a great ship. The very air was alive with sparks, then there was the noise: the ceaseless clanging and hammering, the pounding as the steel was shaped and joined, the whirr and whine of gears, the shouting, the banter, the craic.

You had to have your wits about you in the shipyard. The work was hard, there were hazards everywhere and the banter was just as sharp. There was pride too, among the men that built the ships. The ones who built the great ship. Every calloused hand had a part in a long story of blood, sweat and years. There was a strong sense of pride in Titanic, which not only provided huge employment for the shipyard and ancillary businesses, but also symbolised the engineering skill and initiative of Belfast and its people in producing what would be the biggest and best vessel in maritime history. Now, tourists from across the globe flock to the city, drawn to the faded grandeur, inspired by the illustrious history or indeed in search of their own Northern-Irish heritage.

First opened in 1911, the building and neighbouring dry dock are the world’s only authentic Titanic landmark. Situated in the heart of Belfast’s Titanic Quarter, the pump house, along with its neighbouring dry dock will now be turned into a new whiskey distillery and tourist attraction – all without altering the original fit out – the original pump equipment and internal historic features of the building will be retained and available to view as part of a visitor tour – nothing in that respect will be altered in any way. The Distillers insist that everything will remain as is, it will simply be mended where needed to make sure it lasts for generations to come. The only additions to the pump-house will be the installation of three large stills on a mezzanine floor overlooking the original pumping engines which are situated deep in the pump-well.

This will not change the fabric of the building, it will simply be a floating platform from which you can better view the pump-well. Adjacent to the pump-house will be a tourism centre, which will include an on-site ‘speakeasy’ bar and cafe with gift shop, exhibition space and a mezzanine floor with tasting rooms. Today, the world’s most famous liner lies at the bottom of the Atlantic, inaccessible to all but the most intrepid of deep sea explorers, however, here in Belfast you will find the closest link to the great ship. In the shipyard where the dreams of Bruce Ismay, William Pirrie and Thomas Andrews were brought to life by thousands of Belfast builders, you can still see the places where she stood, towering against the skyline – the largest moving object ever constructed by the hand of man.

It was here, at dry dock 401 beside the pump-house, where workers put the final touches on the most luxurious liner ever built. And it was here that engineering brilliance reached new heights as great minds applied themselves to the gargantuan task of building such a grand vessel. Still in near perfect original condition, Titanic’s pump-house and dry-dock represent the pinnacle of Edwardian engineering and it’s here you have a unique opportunity to see Titanic’s birthplace just as it was when she was here, to see just what her builders would have seen as they stood here. From Titanic’s physical footprint in history to the stunning pump-house with the original engineering works that operated the dock, everything here is almost exactly as it was when Titanic glided in to the dock almost a century ago. In the pump-house, you can see the original, massive machines that worked the mighty dry-dock as well as the tools used by the workers to bring the world’s largest ships to life. The shipyards that built the Titanic still have a massive influence over the city – the shipyards don’t just illuminate the city’s heritage but now also help to bind and inspire its communities and now, thanks to Titanic Distillers, the pump-house and dry dock will be saved for future generations.

Peter Lavery Titanic Distillers Director, said: “In the days before Prohibition, Belfast was once the largest producer of Irish Whiskey on the island of Ireland. Whiskey has played an important part in the history of our city but there hasn’t been a working distillery here for almost 90 years. We want to revive this great distilling tradition and bring Belfast back to the forefront of Irish Whiskey production, while at the same time telling the story of a glorious past when we led the way globally – not just in shipbuilding but across many areas of industry, manufacturing and innovation.” 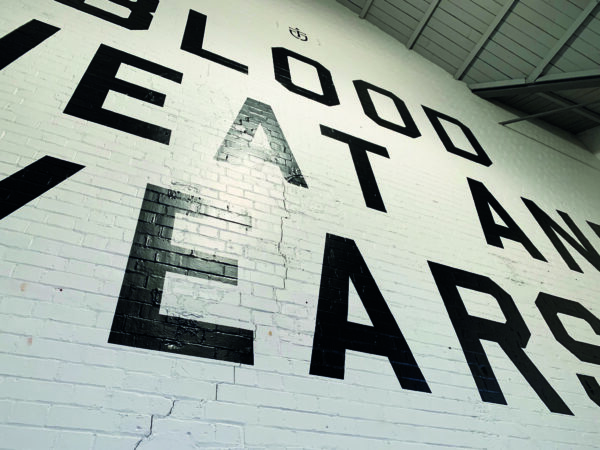 Oh This Year We’re Off to Sunny… NI!

Second ‘G for Good’ Raises Over £30,000 for Indigenous Community

THE GIFT THAT ‘FITZ’ THIS CHRISTMAS