Properties sporting the B&B sign are a fixture in all UK tourist destinations, including out-of-the-way locations not served by chain hotels

A B&B stay is an opportunity to have the closest possible encounter with seaside, rural and urban life in Britain. B&Bs have been a key feature of British life for hundreds of years.

Check out these awesome B&B facts:

Books are a staple on holiday – and many B&B owners find that guests deliberately or inadvertently leave books behind after their stay. A poll of 6,500 B&B owners has revealed that the well-thumbed books most likely to be left behind by guests over the last year. The list includes romantic and literary fiction, horror, thrillers, autobiographies and children’s books. The most prominent fiction books were Paula Hawkins’ ‘The Girl on the Train’, Dan Brown’s ‘The Da Vinci Code’, Stephen King’s ‘The Stand’ and EL James’ ‘Fifty Shades of Grey’. Children’s leave behinds were rare, but JK Rowling’s Harry Potter books took pole position. David Walliams’ books also featured highly.

A Harry Potter-themed B&B in JK Rowling’s home town of Edinburgh, The Canongate, has become popular with holidaymakers. The amazingly-detailed property (brick effect door pays homage to the entrance to Platform 9 ¾) has attracted national media attention for its impressive attention to detail.

B&B owners often receive unusual breakfast requests from guests. The most unusual reported by owners were:

Seven Unusual items left behind by guests include:

Unusual items brought by guests have included bagpipes, a fridge and a tent for the car and dog

Fifteen Most unusual requests from guests include:

The Manor is a 16th century listed building, with bundles of character and was featured on the television programme Britain’s Most Haunted. Surprisingly, guests return to Room 8, supposedly the most haunted room in the building.

The Brocket Arms was originally the monastic quarters for the Norman church until the Reformation. Legend has it a priest was tried and hanged in the building and that it has been haunted by the surprisingly-affable-given-the-circumstances character ever since.

The Shoe Inn has been a resting place for travellers for hundreds of years. The original thatched Inn is believed to date from 1420 and was extended around 1640 to become a posting station for the mail coaches. A tollgate was constructed across the road and the landlord was responsible for collecting the King’s tolls on the border between Hampshire and Wiltshire. The last New Forest highwayman was caught drinking in the Inn one night and publicly hanged the next morning. It is said that his ghost remains in the old thatched building. Happily for guests, the ghost resides in the owners’ accommodation. The only spirits guests will see are in the bar.

Dobbins is said to be home to the ghost of Elizabeth Dobyn, who is now known as “Maud”. She wanders the hotel in search of her fallen lover. The owners can tell you many a tale about her spooking guests in the hotel.

Binniemyre was built in 1862 for a local mill owner and was originally called Eildon View, as at that time no other houses had been built in the area and the house had uninterrupted views to the magnificent Eildon Hills. The house was built for the Morrison family, who were one of many wealthy mill owners in the area. They had a large family but were tinged with sadness. One daughter, Lucy, jilted before her forthcoming marriage, was so distraught that she took her own life in the house’s private chapel room. As this act was considered a crime in that era, Lucy was not allowed to be buried in the town, but her name can be seen on the family gravestone in Eastlands Cemetery in Galashiels. Lucy’s ghost is rumoured to visit Binniemyre. Both Carol (the owner), her mother-in-law and other guests have mentioned seeing a woman in a white dress walking around the house. One guest said that she sat next to him on the couch in his room. 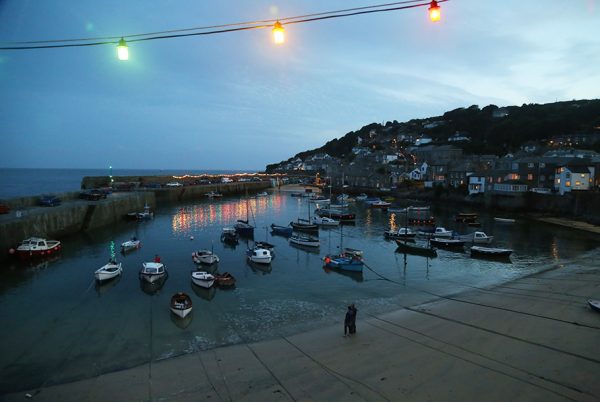