Symphony of the Seas Makes Waves

Royal Caribbean has a brand new addition to its fleet of cruise ships, bringing the number to 25 – weighing in at 228,081 GRT, arranged over 18 decks and with a length of 1188 feet, Symphony of the Seas is not only Royal Caribbean’s largest ship, but it is currently the largest cruise ship ever built, surpassing its 2016-launched sister ship Harmony’s dimensions, albeit by a whisker.

Delivered to Malaga from the St Nazaire shipyard in March 2018, I was lucky enough to be onboard along with a large group of travel agents, Royal Caribbean staff and international media for two days, in order to experience the ship in all its glory before she made her inaugural seven-night voyage with paying passengers on April 7.

The Symphony, along with Harmony, Oasis of the Seas and Allure of the Seas, make up a quartet collectively known as ‘Oasis’ class ships which are the world’s largest, and most technologically-advanced, passenger ships. Royal Caribbean Cruises’ CEO Michael Bayley described the ship as “the latest, greatest and best”. A fifth Oasis-class ship, set to be even bigger than its sea-going siblings, is due to launch in 2021.

Almost as long as four football pitches, Symphony has 2759 staterooms capable of accommodating up to 6680 guests and 2200 international crew members. The sheer size of the vessel is stunning – I caught my first sight of the ship long before arriving at the dockside in Malaga – it was very hard to miss.

My stateroom on Deck 11 was very spacious, with plenty of storage for clothes and personal items, and featured a large flat-screen television, a mini-bar and sofa, even though it was classed as a standard balcony cabin.

While the ship shares many of its features and attractions with the innovative Harmony, there are some subtle differences. In addition to millions of pounds’ worth of original works of art on display, one unique feature is The Ultimate Family Suite, perfect for large families for whom money is no object – a family of six have booked it over Christmas and will be paying $85000 for the privilege!

As with the other Oasis class ships, Symphony is divided into ‘Neighbourhoods’, which include the outdoor, tree-lined Central Park, featuring several of the ship’s premium dining establishments including Jamie’s Italian, as well as various upmarket shops and boutiques.

These include a speciality hot-dog stall and American diner Johnny Rockets, while the Royal Promenade contains the incredible Bionic Bar, where customers can enter their cocktail of choice onto a touch screen and watch it being mixed and served by a pair of robotic arms.

Thrill-seekers are catered for as well, with a surf simulator, laser tag games, a trio of water slides, zip wire experience and rock climbing wall, all guaranteed to get the adrenaline pumping. But the main attraction for scaring yourself silly is the Ultimate Abyss – a 10 storey slide which is taller than Buckingham Palace, where participants enter the ‘Jaws of the Beast’ on Deck 16, ending up on Deck 6 twelve seconds later, via a series of terrifying twists and turns.

Of course, none of these activities are advisable on an empty stomach – and on Symphony, there are 20 restaurants with over 300 individual menu options to choose from. Windjammer Marketplace provides an extensive buffet service for most of the day, while quick snacks are on offer all over the ship, ranging from quesadillas and burritos at El Loco Fresh, to pizza slices at Sorrento’s.

While most dining options are free, guests can experience some truly imaginative cuisine at one of Symphony’s twelve speciality restaurants for a nominal extra charge and these include high-end international fine dining at 150 Central Park, Jamie’s Italian, Hooked Seafood and Coastal Kitchen, while Chops Grille serves a carnivore-friendly selection of hand-cut steaks, organic chicken and seafood.

There’s no doubt that Symphony of the Seas with its amusement park-themed activities will appeal mostly to fun-loving groups of friends, younger couples and families, while older voyagers will find more than enough attractions to keep them happy. The ship’s home port will be Barcelona until October, where it will offer mostly 7-night sailings, visiting ports in both the Eastern and Western Mediterranean before moving to Miami in Florida, where it will begin sailing around the Caribbean until spring 2019.

For more details on Symphony of the Seas itinerary and booking information, visit royalcaribbean.co.uk. 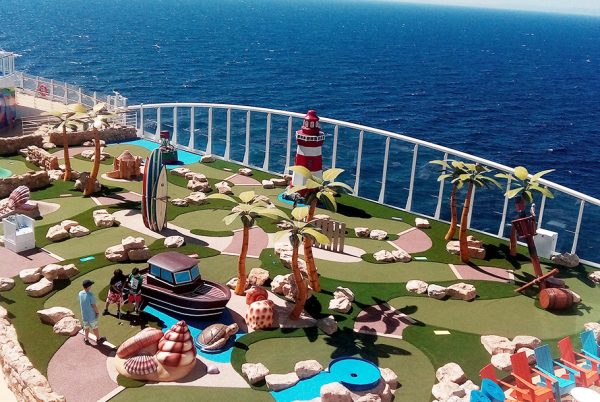